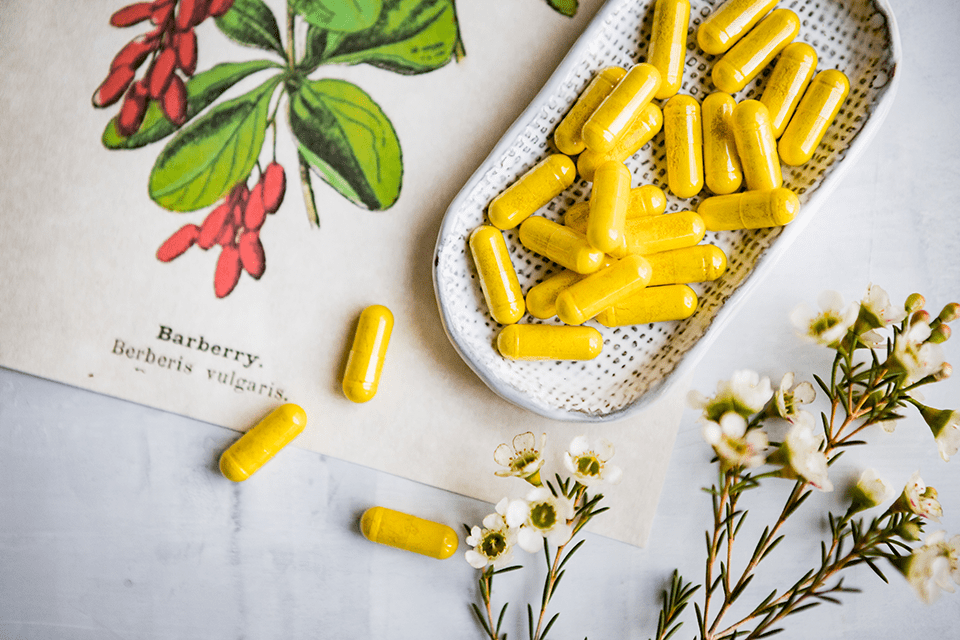 Berberine is a plant extract traced to ancient medicine. But modern science reveals that is an effective, natural tool to consider for healthy blood sugar balance.[*][*]

Outside of the scientific and homeopathic communities, many health-minded Americans may wonder what is berberine, because it’s not as recognizable as other antioxidants, such as resveratrol and turmeric.

Like turmeric, Berberine has a deep, vibrant yellow color. And while its powerful therapeutic compounds are linked to an assortment of benefits, such as a healthier heart and gut, it’s how berberine benefits blood sugar, metabolism, mood, and supports weight loss that we’ll explore here.

Berberine’s therapeutic properties are believed to be antimicrobial and anti-inflammatory and produce anti-oxidative activity.

Plant alkaloids are a class of active compounds proven to have physiological effects on humans and have been adopted into Western medicine.

The clay tablet of an Assyrian emperor from 650 B.C. depicts the first recorded use of barberry fruit as a blood-purifying agent. Berberine has been used in Chinese and Ayurvedic medicine, and Native American healing rituals for centuries.

Within Ayurveda, considered to be the oldest healing science, berberine has enjoyed over 1,000 years of use. In traditional Ayurvedic medicine, berberine is used for an assortment of health concerns, from calming indigestion and hemorrhoids, to minimizing obesity and dysentery.[*]

In Chinese medicine, it has long been used to help eliminate toxins and support the liver’s natural cleansing process.

A balanced level of blood sugar is a key factor in maintaining steady energy and mood and reducing the risk of blodd sugar and heart problems. It also plays a vital role in how macronutrients become converted to fuel.

Carbohydrates in wheat, grains, and simple sugars trigger the pancreas to secrete insulin, a hormone that helps cells absorb glucose and convert it to energy. The more carbs in the body, the more insulin is released to encourage absorption, that is, until maximum occupancy is reached.

Numerous human clinical studies as well as animal and in vitro studies strongly support that the active compounds in berberine have the ability to reduce blood sugar, thereby having a positive snowball effect on other physiological conditions.

While scientists are uncertain about the precise combination of action responsible for berberine’s effect on glycemic control, there are theories about the suggested pathway.

Despite the many berberine benefits that continue to be explored, it’s the alkaloid’s ability to improve insulin sensitivity, which also has added effects on other conditions that rely on stable blood sugar levels.

Millions of individuals struggle with blood sugar imbalance, where the pancreas is unable to produce an adequate supply of insulin, or cells are insulin resistant. In fact, a 2017 report from the Center for Disease Controls and Prevention (CDC) states an alarming 100 million Americans suffer from significant blood sugar issues, further burdening an already taxed healthcare system.

This is promising research, as those sufferin with blood sugar imbalances can have a natural alternative to maintaining balanced blood sugar levels.

There’s a strong correlation between blood sugar and weight loss. Insulin not only helps transport sugar into cells to be used as energy — it also signals when there’s enough energy, after which the body starts to store it for later use and stops fat burning.

When blood sugar drops too low, the body reacts to the shortage of energy by setting off a chain of events that can lead to a feeding frenzy and overconsumption of calories, particularly in the form of simple sugars and carbohydrates.

Research on berberine for weight loss and fat-burning activity is limited but promising. In one 12-week study, subjects lost about 2.3% body weight — or 5 pounds — and lowered BMI and body fat percentage by 3.6% with a dosage of 3,500 mg per day.[*] Another 3-month study revealed a drop in BMI, from 31.5 to 27.4, in obese individuals, as well as a reduction in waist circumference.[*]

A normal fasting blood sugar level (such as after waking in the morning) is between 70 and 99 mg/dL, and below 140 mg/dL two hours after eating. Both, hyperglycemia (too much sugar in the blood) and hypoglycemia (not enough sugar) can affect mood, cognition, and behavior in different ways.

In individuals with significant blood sugar imbalances, fluctuations in blood glucose can bring about mood swings[*] Symptoms of high blood sugar include confusion, nervousness, and low energy or tiredness.

Conversely, low blood sugar can produce symptoms such as confusion, anxiety, and difficulty making decisions, according to Johns Hopkins Medicine.

Berberine’s traditional use to naturally treat digestive issues makes sense given its superior antimicrobial activity. According to studies, it can help balance the gut biome’s ratios of good and bad bacteria.[*] This may prove to be another pathway by which berberine may help counter blood sugar imbalances, as studies indicate that gut biome support may have blood sugar balancing effects.

To enjoy the glucose-reducing benefits of berberine, it’s important to consume the optimal amount of therapeutic compounds.

Unlike many powerful antioxidants found in common foods such as turmeric (curry, golden milk) and resveratrol (red grapes, dark chocolate), berberine’s active alkaloids are derived from plants that are not readily accessible and available for consumption.

The extract, berberine aristata, has been used in many studies on the effects of berberine.

How Much Berberine Should You Take?

Once you’ve selected a pure, high-quality berberine supplement from a trusted source, the next step is to understand how much berberine to take every day for optimal benefits.

Generally, research supports a daily serving of between 500 mg to 1,500 mg. A review of 14 clinical studies with over 1,000 participants concluded that a daily dosage within this range helped promote healthy glucose metabolism.[*]

Other studies have explored the highest dosage — some of them revealing that 1,500 mg of berberine a day can help to lower fasting glucose levels by 20% as well as A1c level, which is the average blood sugar level over an extended period.[*][*][*]

Another study instructed participants to take 500 mg of berberine three times a day for 13 weeks. By the end of the study, there was a significant amount of weight loss and a 3.6% reduction in body fat.[*]

What about a lower to mid-range amount?

Most berberine supplements are available in 500 mg capsules.

Similarly to turmeric and curcumin, berberine has low bioavailability.[*] Unlike turmeric, however, berberine consumption is limited to a supplement. To ensure a sufficient amount of the active properties are consumed to produce benefits, a larger serving size divided throughout the day is generally regarded as necessary.